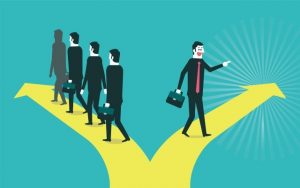 This is the case for every business undergoing some type of digital transformation. In a recent survey by Futurum Research, 1,000+ executives were asked about the impact of digital technology on their businesses.

Too many companies are falling behind – or will be – because they’re failing to build change-ready cultures that can learn, unlearn, and relearn to keep up with the wants, needs, and desires of their customers.

You’ve probably heard the phrase about the seven most dangerous words in business: “We have always done it that way.” Many businesses that are falling behind have a certain amount of this mentality in play. They look back frequently at the past and look forward timidly at the future. They wish for the “good ol’ days” of high-margin box sales and profitable custom code when we’re moving into an era of software-defined networks, analytics, and AI technologies that make old Crestron systems with 1,000 hours of custom code run like 1980s 386 PCs.

The future of the industry will be defined by companies that can change faster than the competition – those that can adapt to new market demands and execute accordingly. This isn’t a far-out requirement. We’re already in a world where cars drive themselves, smart speakers listen and grant our wishes, and AV can be done differently with mobile, flexible spaces. This is what our own technology adoption and media consumption patterns have been telling us.

We need to build companies and hire people because of their ability to be entrenched in change – and for them to learn to like it. To realize that the most successful employees, managers, and leaders will know that today’s popular product or service will be tomorrow’s history lesson. It starts by being okay with a faster rate of change. Then, the vision is realized when we start leading by example, showing our employees that change is okay, teaching them as best as we can to embrace it, and creating a culture that loves the possibility change brings us.

The most successful integrators will be the most change-ready integrators. In other words: We must learn, unlearn, and relearn our way into relevance.  –Dan Newman, Cofounder of V3*Broadsuite