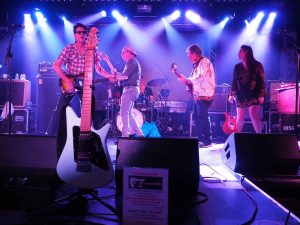 Every year at InfoComm, I heard about the Drunk Unkles event. And, every year, I had a company dinner in the middle of it. Over the years, I made it a few times, showing up at the tail end of the performance. By that time, the room was usually about 500 degrees, very moist, and deafeningly loud – which is, I suppose, what a rock concert should feel like at the end, right?

This year, whilst putting together the fundraiser presentation, I actually started to understand who the Drunk Unkles are and what they stand for. And it’s pretty damn cool.

Did you know that the band was formed 16 years ago as a tribute to an industry colleague and friend who was literally struck by lightning and killed? Then they segued into helping the NSCA Education Foundation through an industry friendship formed by Chuck Wilson and Steve Emspak of Shen Milsom & Wilke.

Did you know that the bandmates have played at over a dozen InfoComm shows together, and over 20 NSCA-affiliated events?

The even cooler part: The band consists of people who were even, at one point, business competitors – but all playing together as friends. And they’ve donated every penny to charity. Those pennies add up to over $1.2 million for the NSCA Education Foundation – which gives back to the industry we are all part of.

Oh, and they are all kick-ass musicians, too. The vibe last Wednesday night at Vinyl in the Hard Rock Hotel Las Vegas was contagious. Inside, they played blues, pop, and straight-up rock – even a badass rendition of the Rolling Stones song The Last Time snarled by Mike “The Pie” Phillips in a crazy Brian-Johnson-of-AC/DC voice. Outside, to the security guards’ dismay, the massive crowd spilled onto the casino floor. I saw an awful lot of #avselfies being taken.

Between personal donations, sponsorships, and a live auction of a guitar signed by Albert Lee, the event raised $102,800 for the NSCA Education Foundation. That’s over $100K to help with the IGNITE and PASS K-12 programs, training and certifications, curriculum development, and scholarships for students and military veterans.

This is all very cool, yes. But, for me, what really came out of it – and I hope for many others – was that the AV community brought itself together, put aside any and all competitiveness, and stood up for something important. This is exactly what I saw last Wednesday night – and exactly what is so important about what the Drunk Unkles and NSCA do.

Let’s give a big shout out to the Drunk Unkles for everything they’ve done for our industry. The all-star band features Felix Robinson, “Unkle” Steve Emspak and Marc Hochlerin of Shen Milsom & Wilke, Mike Phillips of Hudson Marketing, John Cardone of Cardone Solomon and Associates, and “Aunt” Lisa Wenger, formerly of Bosch and now with the Lisa Wenger Band.

Let’s cross our fingers that these guys and gals will keep playing together – or, at the very least, when they do decide to retire, groom some new AV folks to take the reins.  –Kelly Perkins, NSCA Education Foundation Program Director