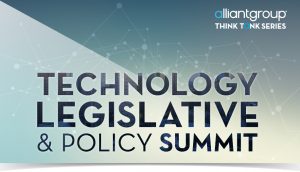 Now that midterm elections are over, we have a better idea about what may happen in terms of legislation over the next two years.

After attending the alliantgroup’s Leadership, Technology & Policy Summit in early November with a few NSCA members – in good company with more than 100 professionals from across the nation (former and current congressional members, state officials, executive officers, U.S. business leaders, CPA partners, and business advisors) – we learned more about the most crucial issues facing businesses and policymakers.

U.S. Congressmen Joe Crowley and Vicente Gonzalez spoke about the policy and political ramifications of the Democratic Party’s takeover of the House. With the Democrats’ newfound majority, Crowley highlighted the benefits of bringing political balance back to Washington and the party’s ability to serve as a check on executive power – which will hopefully bring more transparency and accountability. This latest election brought record numbers of scientists being voted in, along with new levels of diversity.

As we all know, we’re facing a divisive environment: socialist vs. capitalist beliefs. Discussions will no doubt arise about how the national debt is nearing the entire GDP (the United States recorded a government debt equivalent to 105.4% of the country’s gross domestic product last year). What about a fundamentally smaller government? Privatization of systems? The relationship between government and healthcare? What belongs in the private sector vs. the public sector? We also expect the R&D tax credit to be challenged and scrutinized.

The talk of impeachment will likely be a major barrier when it comes to accomplishing anything, but there are some key priorities that will be focused on moving forward:

Taxes will also remain a hot issue. Businesses want certainty when it comes to their taxes. What will the House’s response be to the wealthiest tax rates? Will the corporate tax rate remain stable? (It’s at 21% now.) One side of the fence sees this as a massive increase to debt while the other side sees it as a stimulus. Corporate status type was once decided on based on legal protection. Later, it was based on taxes. Now, the tax parity is causing everyone to rethink it once again.

Real estate state tax deductions may be revisited, moving C corporation tax rates up from 21% to 25%. Capital gains and dividends taxes will likely stay together and remain the same.

Have any questions about what we learned – or what we discussed? I’m happy to chat about any of these issues. Send me a note! -Chuck Wilson, NSCA Executive Director