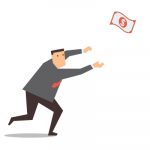 Collecting money is an art, not a science; therefore, people who collect money should be artists, not scientists. Too often, the wrong people use the wrong techniques to collect past-due accounts.

The answer is simple to explain, but harder to accomplish. Between 2008 and 2016, we learned three important concepts about collections:

Learning from Collection Mistakes
In the journey to improve our collections, we made several mistakes. The biggest mistake was demanding that people who hate to collect money do collections. Prior to 2009, we asked our remote branch administrative assistants to make collection calls along with completing other duties: scheduling work, billing customers, entering payroll, and all other administration duties.

Collection calls were always the last chore on their list, and our past-due accounts receivable balances demonstrated their lack of enthusiasm for the task. It was a lose/lose situation. The admins hated to make collection calls (and hated getting chewed out for not getting results even worse).

Because of our ever-expanding uncollectable balances, we came up with the brilliant idea of centralizing collection efforts at our corporate office. Here’s where we made our second big mistake: We staffed the newly created collection department with number-crunching, accountant-type individuals. These individuals were extremely precise about how much the customers owed us and how past due their balances were. They also weren’t shy about telling our customers these precise amounts and demanding that they rectify the situation immediately.

We noticed a few important patterns:

We had good collection tools. We could track the DSO (days sales outstanding) by job, customer, and department. Collection notes were attached to invoices and visible within the system. We also knew how many collection calls were being made on each invoice. This data gave us hints about our first process revision.

There was an obvious correlation between the number of collection calls made on an account and the time it took to collect an invoice. A quick – but not correct – approach was to “require” all collectors to make more calls each day. Not surprisingly, some folks would rather crunch numbers and generate emails before they pick up the phone and ask for money. Management got frustrated and made these analytical individuals miserable by requiring them to double or triple their daily phone calls.

The Key to Collection Success
Our most successful collectors approached phone calls differently. These collectors like to talk on the phone and are extremely personable. Instead of acting like they were trying to bludgeon our customers for money, they act as facilitators to get whatever the customer needs to make it easy for them to pay us. This is when we learned a major truth about overdue invoices: Past-due invoices are almost always “invoicing errors” dressed up as delinquent accounts. The sooner we could identify and rectify invoicing errors, the sooner we got our money.

Our best collector’s first priority is to determine whether our customer has the paperwork he/she needs to pay us. Need a schedule of value? Got it. Want inspection papers or test reports? On the way. Need to speak to our superintendent? Let me conference you in. Do you have an issue about that change order? Let me get your salesman on the line. Our system also allows us to immediately generate emails containing duplicate invoices while we are the phone with customers.

Not everyone is cut out to talk on the phone. Not everyone enjoys solving customers’ endless demands for additional paperwork. Where do you find people of this ilk? We looked at the backgrounds and temperaments of our most successful collectors to identify what makes them outstanding.

Our best collectors had little or no previous background in collections. What they do have, however, is past experience in customer service, whether they were part of a customer-service department or had customer-service responsibilities in prior roles.

Change Takes Time
Was the transition to a more user-friendly collection team easy? No. We went through three collection supervisors before we found our first customer-friendly supervisor. Several of the collection staff members decided that other jobs were more appealing to them. From 2008 through early 2016, there were numerous turnovers on the collections team.

Each turn of the crank, however, yielded results. Since 2009, each year’s average DSO has declined from the prior year. We have reduced our average DSO from a high of 70 days in 2009 down to approximately 49 days in the current year. Our DSO has become progressively better as our revenues have grown from $40 million in 2010 to a projected $92 million this year.

What did we learn? Systems and process are part of the answer. We modeled what worked and taught it to our team. We have more data, automatic alerts, and great diagnostics. That is part of the story. The biggest success ingredient, however, is people.

Currently, we have a collection staff made up of one supervisor and three collectors. Everyone on the team has accountability for a specific department’s DSO goals. No member of this exceptional team had any prior collection experience before joining the team, but they all had some form of customer service in prior jobs. All team members had to learn the lien laws. They have no fear of staying on the phone for hours on end. All team members have enough analytical ability to learn our tracking and documenting system.

Most importantly, all members of our team firmly believe that their job is to facilitate our customers’ ability to pay us. They approach their job as a puzzle to be solved. What barrier can they remove so that the customer is willing and able to pay us? That’s their mission each day, and they live it.  –Eric Morris, CFO, Wayne Automatic Fire Sprinklers