NSCA recently learned about two major losses to our community. Per Haugen and Nancy Emerson both contributed so much to not only our industry, but to the growth and success of NSCA. It’s only fitting that we tell you a little bit about them here so we can remember and reflect on the impact they had.

Per Haugen
Industry icon and former NSCA President Per Haugen passed away at age 86 on June 29, 2016, just before Independence Day – a day that meant so much to him.

Originally from Norway, Per became an American citizen and true patriot. He arrived in the United States with less than $100 in his pocket. His first action after becoming a U.S. citizen was to join the military to protect and defend his new country. Upon his return from active duty, and on the strength of his faith alone, he built an amazing company, General Communications in Salt Lake City. He rose to become the leader of our industry. He was a proud American, and went on to live the American dream.

Per was a mentor to many people. He was instrumental in the launch of the NSCA Education Foundation. His commitment to the development of integrators, furthering the cause of quality companies, and expanding the influence of NSCA’s mission inspired the association to honor him for his hard work and commitment by awarding him the first and most prestigious award we’ve ever given: the NSCA Per Haugen Lifetime Achievement Award. Many people in our industry have been honored and recognized for their outstanding life achievements by receiving this award. He leaves a strong legacy that is a true inspiration for all. 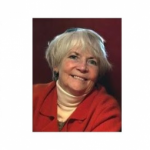 Nancy was a member of the NSCA board from 1997 until her retirement in 2008. She served in many capacities, including each officer role on the executive committee: president, vice president, secretary and treasurer. She was a driving force behind the partnership between NSCA, InfoComm, and CEDIA to launch the Integrated Systems Europe (ISE) trade show. Nancy went on to serve as the NSCA board liaison to ISE and spent many volunteer hours helping launch that great event in its infancy. She and her husband, Joe, ran Midwest Telephone Systems in Des Moines for several years.

Nancy was only the second female to serve in a leadership role at NSCA. She was a great role model for female business owners. Most importantly, she was a kind-hearted person and was very generous. She would love to welcome new members at NSCA functions and events, and always made first-time members and participants feel right at home upon their arrival.  –Chuck Wilson, NSCA Executive Director