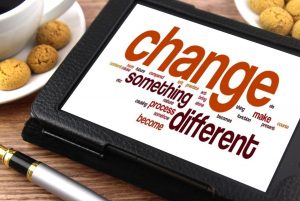 We’ve hit a period in business where change and change management are constantly at the center of attention. The words “disruption,” “innovation,” “digital transformation,” and “agility” may be used somewhat interchangeably, but the idea that change is coming fast and furious isn’t just alphabet soup.

In this very moment, technological change is as fast as it has ever been – and as slow as it will ever be. We’re being forced to adapt to new ideas and adopt new technology at breakneck pace. This is one of the scariest and most opportunistic shifts that has taken place in most of our careers. Change too slow and you die, push too hard for change and your team loses the plot – but if you stand idle, your death isn’t an “if” but a “when.”

Last year, a striking data point stated that only about 50% of organizations saw digital transformation as a board-level concern. While many companies in the integration space may not operate at the direction of the “board,” this rather concerning data point served as a warning sign that too many companies delegate the most critical organizational changes to upper- and lower-management tiers rather than owning it at the very top. This mindset is risky, and the thought that meaningful digitalization can be delegated needs to be eradicated from any mind that has considered it.

Be the Change You Wish to See
Right now, if I had to predict what was keeping leaders of integration companies awake at night, it would be the breakneck pace of change – along with wondering what tomorrow’s products and services may look like. Questions like, “How can we really become a services company?” Or “How can we compete with cloud-based services that include a whole collaboration suite for $10 or $20 per user per month?” These are good questions to ask; they are the ones that should set your strategic direction. These types of solutions are exactly the competition that you will soon be facing.

But many CEOs delegate or ignore this challenge, potentially seeking for it to be solved by those among their ranks. Perhaps the sales manager or lead engineer is supposed to be looking for new solutions to specify, or to come up with a new compensation model that motivates sales teams to sell more services. Sure, these team members can and should participate in the process, but a CEO would be remiss to think that being a direct part of this is not in his or her job description. There are three big reasons for this:

We have entered a time where the buzz of change and the act of change are both at peak volume (AV joke!). But this need for change is emphatic. Integration clients are going through their own rapid changes that will impact the technology they purchase and the way they utilize it, among many other things.

Integrators need to change, and their CEOs need to be the champions of this change. It’s important, though, that you don’t just ask for change – but that you lead this change. This is the most important step toward becoming a company that can adapt to what’s coming – no matter how much faster the change gets (and it will get faster).  —Dan Newman, Cofounder of V3*Broadsuite