Just in time for Halloween, it has become very scary around here. Fear stretches from the halls of Congress out to Main Street. With a near debt default and a federal government that was shut down for over two weeks, it appears that many in Congress were waiting for the Great Pumpkin to appear – a magical being that would stop healthcare reform and create a budget surplus, allowing us to live in a world where dogs and cats get along. 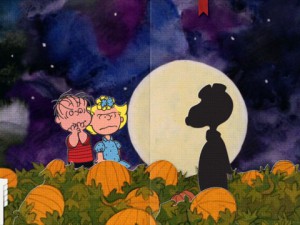 But in came Snoopy (or, in this case, the Senate) to reveal that the Great Pumpkin was, in fact, not real; there are other battles to be fought. The House gets put to bed thinking they can try this again next year. The dynamics in D.C. right now are made up of two very stubborn bodies: the House and the Executive Office, and a Senate that has to play mediator. Did we ever think this would be the scenario?

We did not default, and a new debt limit has been set … but it’s still just a short-term fix. Not a lot of work typically gets done in Congress from November 1 through February 1, but a big debate will continue about the debt limit and budget figures. Answers have to be determined by January 15 before we default and/or shut down again. A conference committee has been established; a proposed budget to continue funding for FY 2014 is required by December 13. But remember when the SuperCommittee was supposed to do the same thing … and that led to sequestration? This conference committee must deal with a right wing that demands preservation of the $967 billion discretionary spending level set for FY 2014, and a left wing that wants new revenue to make up for the cuts – therefore creating new taxes. Optimism isn’t flowing freely these days….

Just today, after a compromise had been determined both sides of the aisle continue to point their fingers at each other and focus on mid-term elections for 2014. Enough is enough.

None of our businesses, citizens, or pocketbooks deserves the behaviors we’re seeing from the elected officials currently in office. People were without work, and our country was vulnerable … all because of what? The desire to be re-elected? To prove a point? What good did it do?
So now we wait … we wait like Linus, who thinks that the Great Pumpkin will come back every Halloween, only to be fooled over and over. Perhaps it’s time to believe that the Great Pumpkin does exist. Our answer may come next November.