It’s the holiday season, and many of us are busy preparing time away from the office, completing last-minute budgets and strategic plans, and hopefully taking a breath and enjoying time with family and friends.

But in the meantime, the last few weeks have been pretty busy here in D.C. Between www.healthcare.gov starting to work more consistently, the announcement of the one-year delay of the online small business exchange (SHOPs), discussion on increasing the federal minimum wage, and now a budget deal – perhaps cats and dogs can get along.

Earlier this week, the bipartisan committee established to create a budget deal did, in fact, create a budget deal. The President even said, “This agreement doesn’t include everything I’d like — and I know many Republicans feel the same way. That’s the nature of compromise.” 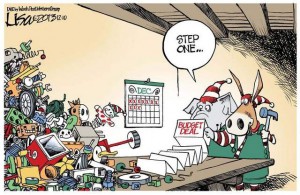 The good news (beyond the fact that Congress actually worked together)? It doesn’t appear that any tax increases are immediately heading our way, and the effects of sequestration will be seen a bit more slowly as they are rolled out over the next two years. There is a reduction in the deficit; most importantly, however, it appears that, at least for two years, there will be a stable federal budget to work with, and perhaps long-term planning can begin for the private sector. This could help increase construction and investment in technologies.

Looking into 2014, there are quite a few priorities that will need to be ironed out: long-term unemployment insurance, tax reform, minimum wage, and a multi-year farm bill. These are important topics leading up to the mid-year elections.

While unemployment insurance would be an expense, the Democrats are also seeking tax increases to offset these costs. Additionally, with 55 tax provisions set to expire on December 31 – discussions on extenders and tax reform will become a hot topic this January. While businesses have gotten used to these last minute heroics to extend items such as expensing for small business or bonus depreciation, the Senate is expected to create a package extending these items.

The federal minimum wage issue will become a priority as more and more groups, including the National Restaurant Association, are proponents of an increase, and hope this initiative will improve the economy and unemployment. Two bills in particular – S. 460 and H.R. 1010 – would require the minimum wage to be raised from $7.25 to $10.10 an hour over the course of 2 years and 3 months. The Senate was to have voted on this initiative this week, but the budget negotiations took priority. Economists have noted that raising the minimum wage can provide certainty to the economy, level out income ranges, and, in fact, will not deter from hiring as it is applied over time and employees want to stay at their jobs longer.

On Thursday, Nov. 28, the Unified Fall 2013 regulatory agenda was also released. Many in the construction industry are looking at the I2P2 regulation (the injury and illness prevention program) that would require more reporting measures for employers with more than 250 employees. While it doesn’t affect most NSCA members, there are still many questions about the frequency of reports, the types of reports to be made, and the fines (if any) associated with not reporting. This rule has been in process for quite some time, and the latest agenda still does not give a timeframe for a final rule to be listed.

It’s a busy year ahead, and one in which owners and managers need to remain vigilant to changing policies affecting their businesses.

Enjoy this holiday season and expect more information and engagement from NSCA on issues affecting your business in 2014. Happy Holidays and a very Happy New Year!