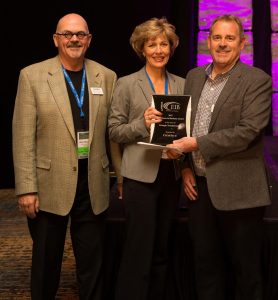 Over the next few months, we’ll take an inside look at how the NSCA 2017 Excellence in Business award winners have adapted to the constantly changing industry. The story of ClearTech is second on the list. (If you missed the first blog in our series, click here.) For the successful launch of its managed services program, ClearTech was named an NSCA 2017 Excellence in Business award winner in the Strategic Transformation category.

After its leadership team attended the NSCA Business & Leadership Conference, ClearTech was inspired by the “pivot to profit” theme that echoed throughout the event, which communicated the importance of managed services. As a result, ClearTech decided to formally launch its first managed services program, utilizing what staff members learned at the Business & Leadership Conference to get started.

Slowly, But Surely
Instead of rolling out a large, comprehensive program all at once, ClearTech took a more planned approach: It asked one key client to help by serving as a pilot, deploying managed services across the client’s business. The client graciously agreed to assist; several months were spent growing and implementing managed services offerings.

To manage the new program, an internal team member was promoted. To get him started, ClearTech recommended that he attend NSCA’s first Pivot to Profit event in October 2016. This event shared information with 175+ attendees about how to “pivot” to manage the unavoidable disruption headed toward the current revenue models of systems integrators. Sessions included discussions about the culture needed to support managed services, the risks/rewards of making the move, sales compensation plans, metrics to measure success, and the types of staff members needed to start a managed services program.

New marketing materials were also created by ClearTech for its managed services offerings, including a major website update, a five-page color digital brochure, and a tiered services plan that includes three levels. A managed services line item was also added to all project proposals.

ClearTech adopted ConnectWise as its new managed services CRM after learning about it through NSCA and receiving positive feedback about it from other NSCA members. The company has also incorporated other aspects of its business into the software as well, including project management, job costing, project scheduling, service tickets, and database management.

As a result, services have grown from less than 5% of ClearTech’s total revenue to a projected 15% of 2017 revenue. “We believe that launching managed services is the most important decision we have made to strategically grow our business,” says Christina DeBono, president at ClearTech. “NSCA not only gave us the inspiration for managed services, but also the tools needed to realize our managed services business!”

Check back soon, as we continue to reveal how the 2017 NSCA Excellence in Business award winners made business changes to adapt to the constantly changing industry. You’ll also read stories from: