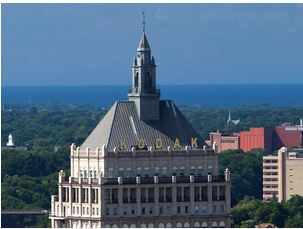 Of the roughly 200 buildings that once stood on the 1,300-acre campus of Eastman Kodak’s business park in Rochester, 80 have been demolished and 59 others sold off. Terry Taber, bespectacled, 60, and a loyal Kodak employee of 34 years, still works in one of the remaining Kodak structures, rubble from demolition not far from its doors.

Mr. Taber oversees research and development at Kodak. Many people might be surprised to know that Kodak is still in business at all, much less employing someone in the hopeful-sounding enterprise of developing new technology ideas. But if the film company, which emerged from bankruptcy in 2013, has any light in its future, Mr. Taber is likely to have something to do with it.

In a warren of basement labs, some of the 300 scientists and engineers who work for Mr. Taber are studying nanoparticle wonder inks, cheap sensors that can be embedded in packaging to indicate whether meats or medicines have spoiled, and touch screens that could make smartphones cheaper.

Much of this is old stuff, left over from the company’s glory days. But Mr. Taber’s boss hopes that somewhere in those projects there might be a nugget of gold.

“I’m mining the history of this company for its underlying technologies,” said Jeff Clarke, 53, who became Kodak’s chief executive last year. Mr. Clarke has no delusions that Kodak could bring those technologies to market on its own; it will need corporate partners to make actual products. “We’ll never be able to prosecute the value of our intellectual property with Kodak-branded sales,” he said in an office in the same tower where George Eastman once looked out on his global tech empire.

What happens after a tech company is left for dead but the people left behind refuse to give up the fight? At Kodak the answer is to dig deep into a legacy of innovation in the photography business and see if its remaining talent in optics and chemistry can be turned into new money in other industries.

Once a household name as big in its day as Apple and Microsoft have been for later generations, Kodak was part of everyday life, its film — sold in a yellow box — recording births, vacations, weddings. And then Kodak became a cautionary tale about what happens when a tech company is slow to change. For Kodak, the advent of digital photography was ruinous. Today it has $2 billion in annual sales, compared with $19 billion in 1990 when consumer film was king. It now has 8,000 employees worldwide; it had 145,000 at its peak.

Since emerging from bankruptcy, the company has mostly served niche film markets — there are still a few die-hard directors who refuse to shoot digital — and provides equipment for printing newspapers, on packaging and the like. Much of its revenue comes from legacy businesses. For Kodak’s new chief executive, along with veterans like Mr. Taber, the key to survival is in its research legacy, thousands of patents and a coterie of scientists who are making new discoveries.

At the research lab, a laser prints a 256-count mesh of silver wires four one-thousandths of an inch across, thinner than a credit card, in one second. That technology could be the basis of a new kind of phone screen, cheaper and more useful than the touch screen. It is work that Mr. Taber and his veteran team are clearly proud of.

“People ask me why I’m still here,” he said. “It’s because I see the possibilities.”

But look closer. That laser runs on Windows 2000, an operating system Microsoft basically discontinued a decade back. And most of the security badge photos carried by employees have ghostly stripes, a mark from decades of swiping the office security panels.

If any future is coming for Kodak, it had better hurry up.